After a long day touring Jaipur our driver Vinod and the guide for the day Amit said Rajasthan Tours had a surprise for us. We only knew it was high tea. They drove and drove then made a right turn into a driveway where the two Sikh gatemen in uniform opend the wrought iron gates and as we drove in the sign said Taj Rambagh Palace Hotel. Were talking 5+ stars here. We were greeted at the front door by four people, two staff members, one who anointed our foreheads with the red dot meaning welcome and the second staff member put flower garlands around our necks. The other two guys were managers of Rajasthan Tours whose headquarters are in the hotel. We had high tea out on the lawn. Indian bone china, silverware and the tiered trays were sterling. At the edge 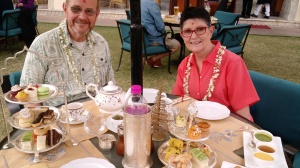 of the lawn area was a retaining wall and beyond that was more lawn over acres of land, manicured with gardens, fountains and a herd of peacocks. Got a slight look at how the 1%ers live. Kuldeep Rathore, Rajasthan Tours asst. mgr. said rooms for New Years Eve started at $1,300 USD.

Crazy and wonderful evening. With the exception of our room and one other room, the whole hotel was booked by the same extended family who meet  every year for a New Years Eve reunion. They were from USA, Canada, Australia and India. As the outsiders, we were warmly embraced by all members who wondered who we were. Guess they thought we were new in-laws since a few members were Anglo. A group of really beautiful women. Amazing how many have lived in California. One girl attended the Athenian School in Danville. Had a great time, gratis on the hotel, including a hosted bar and heavy appetizers (dinner). Danced till midnight to India techno beat. Like a rave.

That morning we met the guy in the other room which was not a family member. Arun Singh lives in Raleigh Durham NC and is the CEO of an information technology co. He immigrated to US in 1983. In chatting this morning he mentioned that his father had been governor of Rajasthan. Later this evening he came  up to us and introduced us to his 2 college aged sons. The three of them had had lunch at the royal palace with the king of Rajasthan.  How cool!

All in all, had to go down as the most memorable New Years Eve ever. We left after midnight but the party continues under our room. Indian techno until 5 AM. Think we will sleep through it. 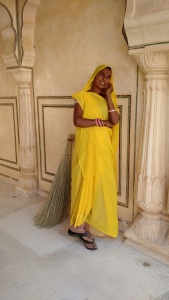 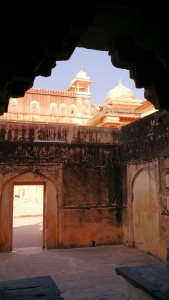 We started New Years Eve day with an early 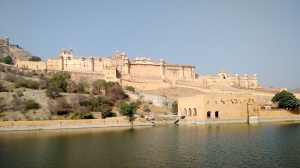 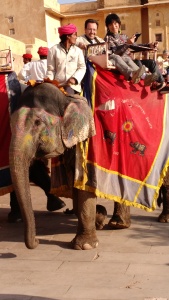 morning trip to the Amber Fort in Jaipur. 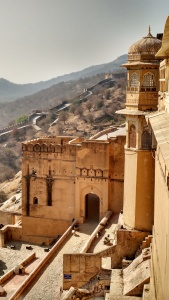 The fort is the center of the old town of Jaipur or the Pink City. Everything in the old city is terracotta pink in color. The city walls ramble over the steep hills for miles resembling the Great Wall in China. City architectural codes maintain the natural terracotta color and the huge Fort and emperor’s palaces are all UNESCO Heritage Sites. All were built in the 17th Century.

The British basically left Rajasthan alone during their occupancy. Rajasthan contained 59. kingdoms. It still does but all titular. India is a democracy as of 1947 when the Brits pulled out. The current King of Jaipur is a 17 year old college student living in his 49 room Palace in center of town.

The afternoon was spent exploring the areas around the palaces and Jaipur Museum. 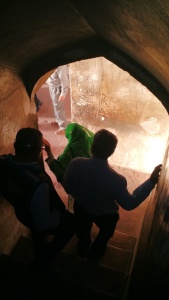 First, I haven’t figured out the proper formatting of text and pictures on this site. They will be continue to be jumbled. My apologies.

After a 4 hour drive from Delhi we arrived at our hotel in Agra. We drove on a new 6 lane toll expressway. Very nice road. We checked into a really old and funky hotel which is in a 120 year old building. Beautiful architecture resembling Raffles in Singapore with wide tiled outdoor hallways and arched columns.  Large room with 4 poster canopy bed. Shower in old free standing claw foot cast iron tub. Furniture is all antique with tapestry upholstery. 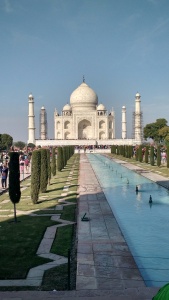 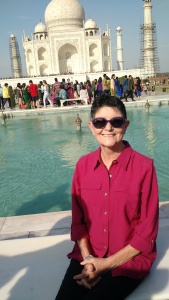 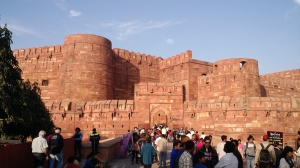 After check in we drove to The Taj Mahal. Took 22 years to build by Muslim King to memorialize his wife who died at childbirth. The Taj Mahal was never a residence. As astonishingly beautiful as expected. The photo of mom sitting on the marble bench is called the Diana Bench. Princess Diana sat at this same spot for her now famous photo. We spent over two hours exploring the interior and grounds.

The kings lived within Agra Fort. A massive complex which housed several palaces and the king’s army. Today, 25% is opened to the public (palaces) while the rest still houses India’s army. The complex is surrounded by double moats.

Agra is a small town compared to Delhi (4 million to 24 million). Much more rural with a lot of cows roaming around. Never saw a cow in Delhi. A truer sense of India. Few cars and tons of motorcycles and tuk tuks for getting around. Delhi is all cars and few motorcycles. Loving it all. A real cultural experience.

Tomorrow morning we are off on a 6 hour drive through the countryside (no expressway) to Jaipur. Our driver, Vinod, is from Nepal and is quite a character. I ride in the front with him while on the road and in the back with mom when a guide is along with us. We pick up a different guide in each city for the day. I was bitching to Vinod about the Delhi hotel charging 300 rupes ($5 USD) for a domestic Kingfisher beer. When he picked us up this AM he presented us with a 4 pack of Kingfisher beer for only 400 rupes. Unfortunately for us he bought extra strong 8% Kingfisher.

Old Delhi is the old walled city surrounded by New Delhi. Delhi has 3 UNESCO Heritage Sites all within 2 miles of each other. They are ruins of primarily Muslim mosques. Interestingly, the succession of these sights architecturally were the forerunners of the Taj Mahal, dome wise. All sights were interesting to see. This was the first time we have heard the loud blasting of the “call to prayer” each at 1 & 4 PM. Guess they do it 5 times a day.

The highlight of the day for us was walking the streets of Old Delhi. Shoulder to shoulder with the masses was a real energy charge. We ran across the larges 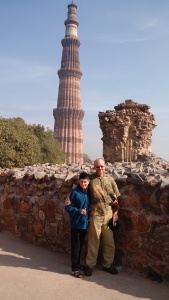 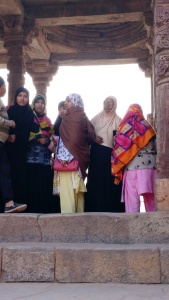 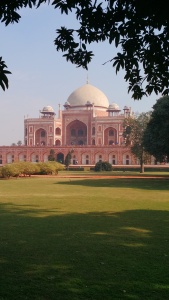 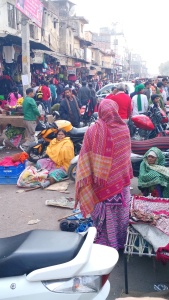 On the Streets of Old Delhi

t mosque in Asia which covered at least 3 city blocks. The streets around the mosque were covered with shops catering to the sale of halal Muslim food products. Poultry killed while you wait and stripped and prepared to halal requirements.

All in all an A+ day of experiences. Tomorrow we head out to Agra and the Taj Mahal. 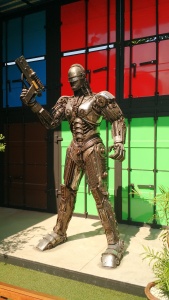 Got in at 6 PM. A long 30 hour transit including 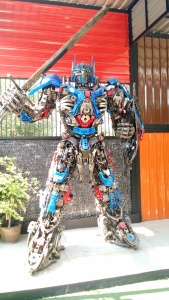 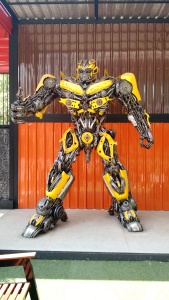 flights and layovers. Staying at new hotel near Indira Ghandi Airport. Met by representative of our tour company and our driver Vinod. He will be with us for next two weeks. A different daily guide will also be with us each day as we change cities. The guide goes to all tourist locations with us each day.

The attached photo is actually in Bangkok. Our hotel the first night had an outdoor gallery of over a dozen transformer type sculptures that were over 12 ft. tall. All were quite impressive.

Back to New Delhi. The hotel security is tight after Oberoi attacks in Mumbai. The entry driveway is barricaded and two security guards check under your car with mirrors and inside trunk and engine compartment. Entering hotel lobby is like TSA at airport. X-ray all luggage and walk under metal detector arch.