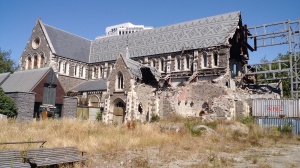 Christchurch, what a sight. They were devastated by two earthquakes 4 months apart in 2011. All the buildings, pre 1900, were destroyed or damaged to the point that they had to be torn down. The central downtown area is block after block of emptiness.

A few 10 story plus hotels are yet to be torn down. On a positive note, the few older buildings which were earthquake retrofitted all held up fine. It does work. The people move on. Great restaurants operating where they are the only building on their block. The federal govt. bought entire city

blocks and will develop them. The second devastating quake hit at 12:45 on a weekday afternoon. The above photo is an art installation called “185 Chairs” commemorating the 185 people killed in the second quake. On this corner, stood the 7 story TV Building which pancaked killing 100 plus people inside.

Yesterday we drove up to Kaikoura which was the epicenter of a 7.8 quake about 9 weeks ago. The coast highway north to Kaikoura just reopened a few days ago. Lots of one lane only areas due to landslide damage to roadway. Some bridges damaged. A slow trip. Lots of damage to buildings in little touristy Kaikoura, many red flagged. The entire land mass in that area raised 6 feet. Previous under water rocks with seaweed attached are now lifted out of the ocean. 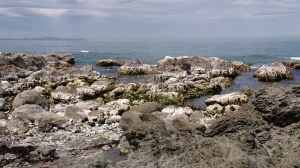 Writing this blog from Christchurch Airport awaiting our flight to Auckland. Turned in our Toyota after logging 3,500 KM or 2,200 miles. Did the southern island justice.