It all starts with the wind picking up. Your side vision picks up a curling blackness in the sky not unlike billowing smoke from your neighbor’s house across the street being totally engulfed in flames. It descends over you rapidly as you hear the first clap of thunder. “Batten down the hatches matties, were in for a rough ride”. The first drops on the cement are the diameter of a 50 cent piece. The rain becomes so heavy that you can only see for about one block. Ten minutes later the rain tapers off then stops. Five minutes later you see the first patches of blue. The day gets

refreshingly cool. Within a half hour the heat is back and humidity rises to 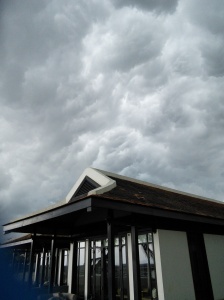 99.999%.Just another late afternoon in the tropics. Gotta love it.